Last month Loughs Agency, in partnership with the Foyle Association of Salmon and Trout Anglers (FASTA), held a Salmon Conference as part of the International Year of the Salmon events programme.  The conference aimed to look at the issues affecting Atlantic Salmon in the freshwater and marine environment, with particular focus on the salmon of the Foyle system. The conference was well attended by members of the angling community interested to hear the latest updates and research developments. 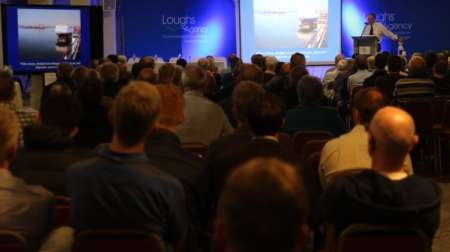 Opening the conference, Loughs Agency Chief Executive Officer Sharon McMahon explained that ‘globally salmon numbers are in decline and we must work collectively to ensure the survival of this iconic fish in the cross border catchments of Foyle and Carlingford areas’.

Speakers, which included Professor Ken Whelan, Dr Cathal Gallagher and Dr Robert Rosell, took the audience through the scientific journey of the salmon and echoed the stark warning that scientists, anglers and government agencies need to work together to protect the Atlantic salmon.  Dr Diego Del Villar also presented to the large crowd on the SeaMonitor project.  SeaMonitor is a unique marine research project, the first of its kind in Europe, studying the seas around Ireland, Western Scotland and Northern Ireland.  It will deliver Europe’s largest telemetric marine array and spatial models, supporting the conservation of several species including Atlantic salmon and will ultimately produce a Salmon Management Plan for the River Foyle. 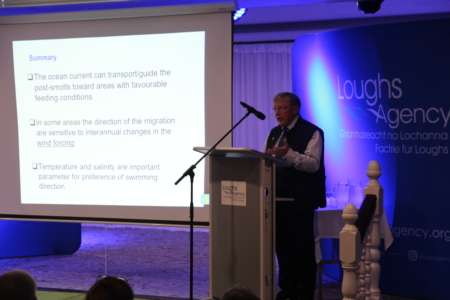 Loughs Agency will shortly be launching a public consultation to capture the views of the public in managing the salmon fishery.  John McCartney, Director of Conservation and Protection said ‘we value the input and opinion of the public when reviewing our salmon management programme.  I would encourage everyone take time to consider and respond to the questions’.

Mr Francis Curran, Chair of FASTA said after the conference ‘I’d like to thank Loughs agency and the professional speakers for providing an interesting forum on the challenges that the angling community face in terms of conservation of our Foyle system.  We recognise that there are many drivers that are feeding into the problem but that anglers are up for working in partnership with the relevant government agencies, fishing clubs, private fisheries and the angling community North and South.  We endorse the consultation process which will be rolled out by the Loughs Agency and will help inform decision makers as we move forward into this difficult period’.