Principal Project Officer – Ross McGill – BA (Hons)
Ross joined the Loughs Agency in January 2019 as Principal Project Officer for the EU INTERREG VA funded SeaMonitor project.   Working closely with all partners, he is responsible for the overall management and delivery of the project.  Prior to working for the Agency, Ross was the Project Delivery Manager for Sustrans in the North West.  With a background in politics and community development, he also worked as an education and development officer in the Republic of Georgia, Nicaragua and the United States.

Senior Scientific Officer (Telemetry) Diego del Villar, PhD
Diego del Villar, Senior Scientific Officer for the SeaMonitor project, joined the Loughs Agency in July 2019. He is responsible for the development of marine acoustic telemetry arrays and spatial models supporting the conservation of a range of marine animals with special focused on salmonids.  Diego’s scientific career has been developed in academia, consultancy and a third sector fisheries trust. He has experience co-ordinating large-scale acoustic telemetry tracking projects (e.g., to assess potential interactions between migratory Atlantic salmon and marine renewable energy developments in the North of Scotland). His research interests are in behavioural ecology, population dynamics, conservation biology, and fisheries ecology which involves combining acoustic tracking and hydrodynamic modelling to study animal’s migratory behaviour. Diego’s research has been carried out in freshwater, brackish and marine environments and involves collaborations within the UK and abroad (e.g. Denmark, Norway, Sweden, Spain and Ireland). Senior Scientific Officer (Analytics) Caroline Finlay – BSc (Hons), MSc, PhD
Caroline is the Loughs Agency’s Senior Scientific Officer Analytics Lead for SeaMonitor, with overall responsibility for data management and to develop web-based repositories for all project data.  Caroline graduated from her PhD in 2018 which focused on agri-environment schemes and landscape ecology. Her PhD had a heavy emphasis on remote sensing, GIS, statistical analysis, and modifying methods used in other industries to answer questions surrounding agri-ecology.  Prior to joining the Agency, she worked as a Red Squirrel Officer for Ulster Wildlife, organising their national squirrel and pine marten survey and creating a database for the Red Squirrels United project. Finance Officer – Ann McPherson
Ann has been a Finance Officer working for the Loughs Agency for the past 19 years. Having previously worked on a number of EU funded projects, Ann joined SeaMonitor as the project’s Finance Officer in April 2019. Ann’s main role is to provide financial guidance and support to all partners.  She has developed her skills in the field of finance and procurement over a number of years; obtaining professional qualifications with Association of Chartered Certified Accountants (ACCA part-qualified), Institute of Accounting Technicians in Ireland (IATI full membership) and diplomas in Procurement and Grants Environment (CIPFA). She has worked for both Public and Private sector in Accounting and Finance roles over a number of years. Ann continues to develop her skills and very much enjoys a challenge. Research Assistant – Amy Garbett – BSc (Hons), MSc, PhD
Amy is a researcher at Queen’s University for SeaMonitor, responsible for liaising with fishermen and engaging them in the tagging and genetic samples programme. She is co-chair of the Regional Flapper Skate Working Group, and works on promoting Flapper Skate and Basking Shark conservation throughout the region.  Amy graduated from her PhD in 2019 which focused on marine biodiversity and conservation, using a multidisciplinary approach including genetics, morphology, systematics and phylogeny. She previously worked as the Northern Ireland management plans project officer for MarPAMM. Research Assistant – Natasha Phillips – MSc, PhD
Natasha is the post-doctoral researcher at Queen’s University Belfast leading the marine telemetry and bio logging studies on basking shark and flapper skate for SeaMonitor.  Natasha completed her PhD on the ecology of ocean sunfishes in 2018 which focused on the diet, spatial distribution, energetics and conservation of a vulnerable pelagic fish species. After graduating, she worked on a post-doctoral project deploying satellite tags and accelerometers on Bluefin tuna to assess post-capture recovery rates and fish migration patterns. These data were compiled to advise government best practise and conservation management of an endangered and highly prized species. She is also passionate about science communication and is involved in many outreach programmes including the Pioneers of the High Seas and as a National Geographic Explorer. Post Doctoral Researcher – Hannele Honkanen, PhD
Hannele is a post-doctoral researcher at the University of Glasgow, based at the Scottish Centre for Ecology and the Natural Environment (SCENE). Her role in SeaMonitor is to deliver the Atlantic salmon tracking work in Scotland, focusing on the River Clyde.  Hannele’s research interests lie in the fields of behavioural ecology, population ecology and fisheries management. Currently her work centers on the conservation and management of migratory salmonids, with particular focus on how populations are affected by anthropogenic impacts. Hannele has five years of acoustic telemetry experience; she has worked on 10 telemetry projects that have ranged from the freshwater into the marine environment. 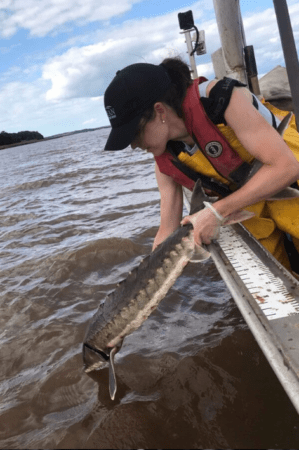 PhD student – Jessie Lilly
Jessie Lilly is a PhD student from the University of Glasgow working on the project SeaMonitor. Her research will focus on tracking Atlantic salmon smolts out to sea from freshwater sites in the British Isles using acoustic telemetry. The results from this study will help to better understand the migratory behaviours of distinct populations of Atlantic salmon, and to help support management decisions throughout various jurisdictions in the North Atlantic.  Jessie graduated from her MSc in 2019 which focussed on studying the effects of anthropogenic disturbances on local fish populations in the Bay of Fundy, Nova Scotia, Canada. Her research used novel acoustic telemetry technology and predictive models to characterize the movement of fishes throughout tidal energy sites in this region. 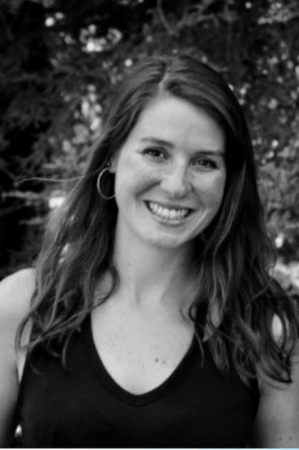 Alexandra (Alex) McInturf – PhD candidate
Alex is a PhD candidate in the Animal Behavior Graduate Group at the University of California, Davis. She is also a visiting researcher with Queen’s University Belfast and a member of the Irish Basking Shark Project. As part of SeaMonitor, Alex’s role is to study basking shark and flapper skate movement and behavior using a variety of biologging and biotelemetry techniques.  More broadly, Alex aims to understand how behavioral and physiological mechanisms can inform conservation measures at a larger scale in threatened marine and aquatic organisms. In addition to her work with SeaMonitor, her PhD encompasses research on physiology and behavior in a variety of systems: sevengill sharks in the San Francisco Bay, salmon and their predators in the Sacramento River Delta, and basking sharks along the western coast of the United States. 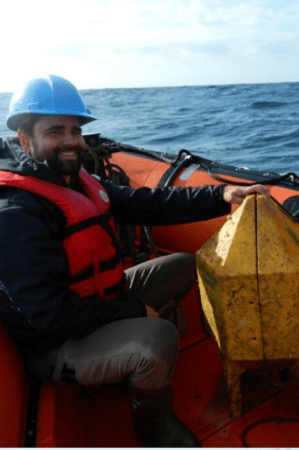 Data Technician – Joseph Pratt, M.Sc
Joseph is the Technical Lead for the Ocean Tracking Network, a global acoustic telemetry project based out of Dalhousie University in Halifax, Nova Scotia, Canada. OTN is a partner project with SeaMonitor, and he and his team will assist with the planning and deployments of the acoustic arrays.  Joseph graduated with a M.Sc. in 2004, with a focus on shark biology, and still maintains a keen interest in shark research and conservation efforts.  Joining OTN in 2013, Joseph oversees a technical team that handles array planning, equipment deployments, recoveries, and data salvaging for OTN’s Canadian arrays, and partner projects across the globe. 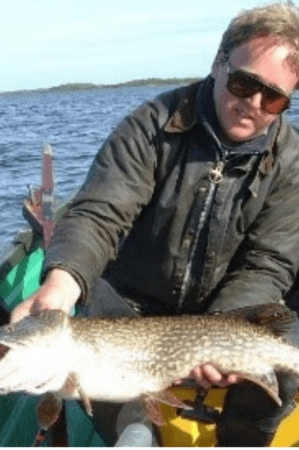 Lead, Principal Scientific Officer – Robert Rosell, PhD
Robert joined the Northern Ireland Department of Agriculture science service in 1986 after completion of a PhD in Marine Biology at the University of Liverpool. He is currently principal scientist and section head of the freshwater fisheries group within Fisheries and Aquatic Sciences branch of the Agri-Food and Bio-Sciences Institute, Belfast. In addition to leading AFBI’s contribution to Seamonitor in tagging and releasing salmon from Northern Ireland Coastal rivers he has research interests in all areas of freshwater fish in Northern Ireland, including restoration of the once extinct salmon to the River lagan, Long term studies of fish populations in Lough Erne and Lough Neagh, Impacts of invasive species in freshwater, and stock monitoring and management of commercial and recreational freshwater fish. Senior Scientific Officer – Richard Kennedy – BSc (Hons), PhD
Richard is a Senior Scientific Officer, working for AFBI and based at the River Bush Salmon Station.  Richard has over 20 years experience working on salmonids and has research interests in various aspects of salmonid biology including juvenile ecology, stock monitoring and fish kill assessment. Since 2009 Richard has been using telemetry systems to study salmon migrations on the River Bush and looks forward to collaborating in exciting new marine telemetry research with Seamonitor! Assistant Scientific Officer – Patrick Crothers – BSc (Hons), MSc
Patrick is an Assistant Scientific Officer at AFBI for the SeaMonitor project. Based at Bushmills, he is responsible for the deployment of marine acoustic receivers which will be used to track the movements of tagged salmonids as they move out of rivers into the marine environment.  Patrick graduated with an MSc in Ecological Management and Conservation Biology from Queen’s University, Belfast in December 2019. His project focussed on using R and GIS along with AFBI’s records to map the distributions of elasmobranchs and other fish species in the Irish Sea. Patrick previously studied Marine Science at undergraduate level at the Scottish Association for Marine Science, graduating in 2015.  Between degrees Patrick worked with Ulster Wildlife, the National Trust, DAERA and AFBI, gaining experience in both fieldwork and stakeholder engagement. 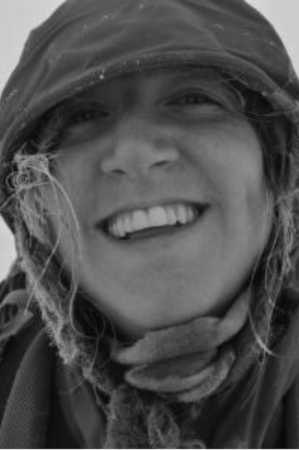 Sam L Cox – BSc (Hons), MSc, PhD
Sam is a post-doctoral researcher for the SeaMonitor project, and is based at the University College Cork. Here, she will investigate the dive behaviour, distribution, post-release survival, habitat-use and interactions with fisheries of rehabilitated harbour seals, fitted with remote tracking devices that record and send data on location and dive parameters.  Sam graduated from her PhD in 2016 at Plymouth University, which focused on investigating links between physical oceanographic processes and the distributions and foraging behaviours of marine mammals and seabirds across shelf-seas. Following this, she completed a 1.5 year post-doctoral position at CNRS in Chize (France), where she worked on juvenile southern elephant seals and aspects of their foraging behaviour and 1st year survival. She then completed a 2 year fellowship at the IRD in Sete (France), focused on investigating the foraging behaviours of booby seabirds across tropical island ecosystems of the Atlantic Ocean. Generally, her research interests are focused on understanding the behaviours and distributions of marine vertebrate predators, to assess how these animals may be impacted by anthropogenic activities and environmental change (e.g. climate change, commercial fisheries), with an aim to improve conservation management. Lead – Joanne O’Brien (BSc, PhD)
Joanne GMIT’s lead scientist on the SeaMonitor project. She is a lecturer at the Galway-Mayo Institute of Technology on the Applied Freshwater and Marine Biology degree, as well as the Conservation Behaviour and IMBRSea MSc programmes.  Since 2004, she has carried out numerous offshore and inshore marine mammal visual and acoustic surveys onboard the state research vessels. She was work-package leader on the PReCAST project, responsible for Static and Passive acoustic monitoring. She was PI on an EPA funded project assessing Ocean Noise in Irish waters 2011-2013 and the ObSERVE Acoustic project (2015-2018). Her research interests are marine mammals, bioacoustics, effects of anthropogenic noise, soundscapes and habitat modelling but is also actively involved in acoustic research across a range of freshwater and terrestrial species. PhD Stipend – Morgane Pommier (BSc, MSc)
Morgane recently started her PhD in GMIT under SeaMonitor project. She will be using data collected from static acoustic receivers and glider deployment to model cetacean distribution and noise near the Malin to Islay Front.  Morgane graduated in 2019 from the International MSc in Marine and Biological Resources (IMBRSea). She conducted her thesis work in GMIT, using visual and acoustic monitoring approaches to explore the habitat use of bottlenose dolphin in Shannon Estuary SAC. Her main research interests include top predators ecology, conservation, underwater acoustics and habitat modelling.